Miami was born and raised to be rich, famous and glamorous. Restaurants can sell second-hand sushi for the price of your leg. For a long time, it has always been an adventure to find decent restaurants on par with flavor, price, execution and service. My boyfriend and I ventured to Eating House in Coral Gables to find that this was no longer the case.

Opened in November 2013, it began as a pop-up restaurant — one of the few in Miami — by Giorgio Rapicavoli, the first Miamian to take the top spot on Food Network’s Chopped. With reservations overloading and huge success, Eating House became a permanent member of the Coral Gables area. Take a look at our mouth-watering experience…

We started off with the brussels sprouts described with the ingredients: “62° egg, raw vegetables, Korean BBQ.” The sprouts were cooked perfectly. Every bite was tender and evenly marinated with a soy based, earthy aroma. I wouldn’t describe it as Korean, but the flavors were reminiscent of Chinese sauces. The egg gave a creamy texture that was somewhat unexpected, but brought the whole dish together. For just $11, the appetizer was great for sharing with up to four people. 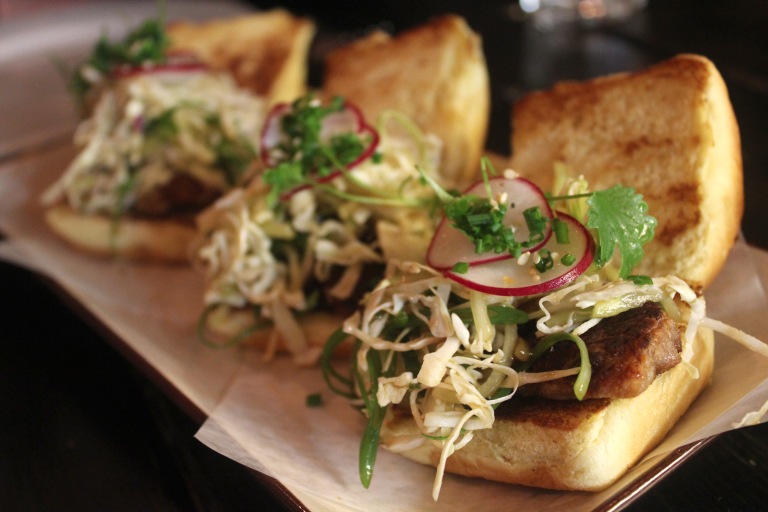 Next was the duck breast sliders, which demonstrated a perfect balance of ingredients in a small bite. The meat was moist and tender, adjacent with crispy cabbage chips and the refreshing greens/herbs. The bread was substantial to balance the taste, but not too much. Priced at $26 it was a good dish to share, but not one of my favorites.

Who likes cauliflower? No one. You wouldn’t expect this to be a fan favorite. Described on the menu as having “lime crema, queso cotija, fritos and chile,” I fell in love. I am a big fan of all things cheese related. The salty cheese crumbles married into the cauliflower fused with a lime crema that made each bite melt in your mouth. At the same time, you have these fritos adding the perfect amount of crunch in every bite! Salty, earthy and a tad sour. Not an expected flavor experience, but very worth it! Priced at $12, this unique take on some of our least favorite veggies is a definite must.

The lamb vaca frita consisted of smoked plantain, onion and citrus. Beautifully plated for such an arrangement of ingredients. The plantain, lamb, pearl onions and greens were laid upon a mystery sauce unusual for a dish named “vaca frita,” which usually resembles a ropa vieja. However, each element stood apart, when eaten together the flavors married quite well. I would say the lamb was tasteful and not gamey, but in small portions not filling for a stand-alone dish. The plantains’ fry-smash-fry process was not as evident, leaving them relatively dry and not as tasty. Priced at $26 it was a decent entrée, but I would try something else next time.

With a range of texture, Asian fusion and Cuban flavor, we were ready to cleanse our palates with dessert. What you see above is not a pot of dirt with a sprouting plant. It is our dessert called “dirt cup,” described with chocolate, hazelnut, pretzel and caramel. We quickly dug in (pun intended) to discover about four layers of ingredients each blended together in a light mousse-like consistency. The “dirt cup” was surely a mastery of texture. The top must have been crumbled Oreo or something made similar, and along with the salted pretzel, both brought out the sweet light, airy taste of the hazelnut mousse underneath. Surprisingly light, the dessert accomplished a balance between sweetness and richness. Since I am not a huge fan of anything too sweet, the savory element was a huge attraction to me. The mousse was smart as a way for it to not be too heavy. Priced at $9, I would definitely get this again. I have never eaten anything like it!

The splash of flavors Eating House offers is great for those who are adventurous in taste. The feeling is the American bar with a hipster makeover showing off local art and servers dressed in plaid. I give it a 4/5 stars, and recommend anyone to give it a shot. Dinner is always tough, so try to get there at 6 p.m. Brunch is near impossible, so reserve three weeks ahead! And of course, enjoy the foodie adventure.